Laptops can often take a beating while they are on the go, but sometimes we see them with more wear-and-tear than expected.  We used to see a common hinge problem on Toshiba’s where the laptop screen would not stay open – the hinges would wear out and the screen would just flop over.

Now that we are pushing for smaller and lighter, we are seeing more failures of plastic pieces which are much harder to fix. 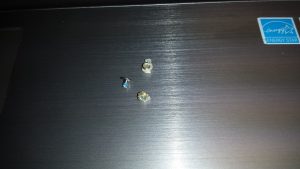 Here are the culprits.  There are tiny (and I mean tiny!) metal nuts that were glued to the back part of the plastic LCD cover.  These were stripped out over time so that the hinge separated from the cover.  My first attempt to re-attach them with epoxy glue failed…

A replacement screen cover was ~$95 and would have to be flown by carrier pigeon because it was going to take a month to arrive.  So, my client elected to go the cheap but guaranteed way (also the client did not care about looks which is a big caveat here). 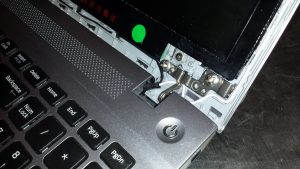 Instead, we drilled through the metal hinges and all the way through the back plastic cover where the nuts used to sit (be mindful of the wireless antenna cables). 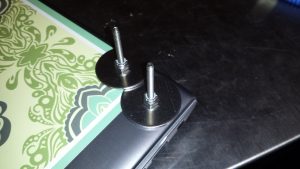 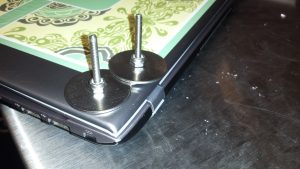 You can see the end result after putting an oversized washer on each bolt along with a lock-nut.  It should distribute pressure along the nut so that the LCD screen can open and close without cracking or breaking off again. 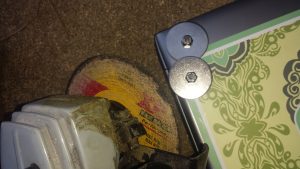 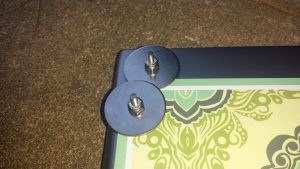 Afterward, we ground off the excess bolt and smoothed it out.  Good as new…..?